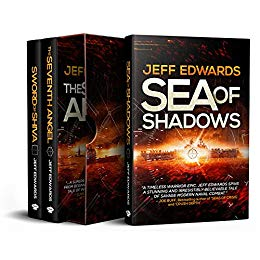 This box set of award-winning naval warfare thrillers from Jeff Edwards includes all three books of the USS Towers series: Sea of Shadows, The Seventh Angel, and Sword of Shiva.These novels have accumulated more than 700 Five-Star reviews and are boxed together for the first time!Praise for the books in this set:“Jeff Edwards has created a superb thriller that grips the reader from beginning to end. Brilliantly executed.”— CLIVE CUSSLER, International bestselling author of ‘RAISE THE TITANIC’ and ‘THE ROMANOV RANSOM’“Unfamiliar and exciting territory—a magnificent yarn! Guaranteed to keep you turning pages well into the night.”— GREG BEAR, New York Times bestselling author of ‘KILLING TITAN’ and ‘DARWIN’S RADIO’“Jeff Edwards spins a stunning and irresistibly-believable tale of savage modern naval combat.”— JOE BUFF, Bestselling author of ‘SEAS OF CRISIS’ and ‘CRUSH DEPTH’THE BOOKS:Sea of Shadows (Book #1) 562 Reviews, Average 4.5 Stars The only way to survive is to change the rules.A minor accident at a German nuclear power plant, a Biological Warfare attack on the British Embassy in Washington, DC, and a secret arms deal combine to drive a trusted NATO Ally into an illegal alliance with a rogue Middle Eastern state. With the world hovering on the brink of war, a handful of U.S. Navy warships must track down and destroy a wolfpack of state-of-the-art submarines.The adversary is skilled in deception and incredibly lethal. Out-gunned, out-maneuvered, and out-thought, the U.S. Navy crews must throw the rulebook out the window, to become every bit as devious and deadly as their enemy.The Seventh Angel (Book #2) 275 Reviews, Average 4.4 Stars The world has forgotten the true nature of terror. It’s about to be reminded.A military revolt in southeastern Russia puts a former hard-line Soviet leader in command of a ballistic missile submarine and its arsenal of nuclear weapons. His goal: re-ignite the communist revolution and recapture the glory of the fallen Soviet Union. Without warning, Russia, Japan, and the United States become hostages in a scheme of international nuclear blackmail. When the warheads start falling and people begin dying, no one can pretend that it’s a bluff.As the earth rushes toward extinction, a lone U.S. Navy warship must penetrate the Siberian ice pack to destroy the submarine before it can destroy the world.It may already be too late.Sword of Shiva (Book #3) 291 Reviews, Average 4.5 StarsA single spark can ignite a war that consumes the world.Three Tibetan rebels attack a train carrying Chinese soldiers into the Tibet Autonomous Region. The insurgents escape across the Himalayas into India, unaware that the son of China’s First Vice-Premier lays maimed and dying among the burning wreckage of the train.As an escalating series of retaliations drive China and India toward outright war, hostilities spill over into the sea, and the Bay of Bengal becomes a crucible of naval warfare.The president of the United States orders a U.S. Navy strike group into the area as a stabilizing force, but the situation between the two nations has already deteriorated beyond any hope of peaceful resolution.With Asia sliding toward annihilation, a small force of U.S. warships must defeat the Chinese Navy to preempt the coming firestorm.The fuse has already been lit.