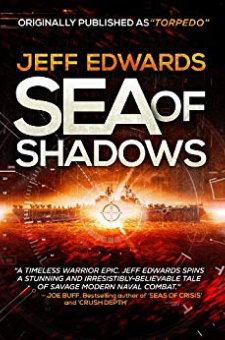 "Here is a writer at the top of his game. The result is a brilliant techno-thriller, the kind a young Clancy would be proud to call his own." -- HOMER HICKAM, Bestselling author of 'Rocket Boys'A minor accident at a German nuclear power plant, a Biological Warfare attack on the British Embassy in Washington, DC, and a secret arms deal combine to drive a trusted NATO Ally into an illegal alliance with a rogue Middle Eastern state. With the world hovering on the brink of war, a handful of U.S. Navy warships must track down and destroy a wolfpack of state-of-the-art submarines. Their enemy is skilled in deception, and incredibly lethal. Out-gunned, out-maneuvered, and out-thought, the U.S. Navy crews must throw the rulebook out the window, and become every bit as devious and deadly as their enemy. If they fail, the consequences are unthinkable... "A timeless warrior epic. Jeff Edwards spins a stunning and irresistibly-believable tale of savage modern naval combat." -- JOE BUFF, Bestselling author of 'Seas of Crisis,' and 'Crush Depth' "...fast and lethal. I read it in one sitting." -- PAUL L. SANDBERG, Producer of 'The Bourne Supremacy,' and 'The Bourne Ultimatum'"... as close as you can get to naval surface combat without being shot at. Jeff Edwards has penned a fast, no-holds-barred thriller that never lets up. Highly recommended." -- JACK DuBRUL, Bestselling author of 'The Silent Sea,' and 'Havoc'(Originally published as 'Torpedo')