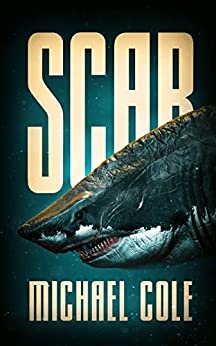 Scar is a killing machine. Born from DNA spliced between the extinct Megalodon and modern day Great White, he has a viciousness that transcends time. His evil is reflected in his eyes, his savagery in his two-inch serrated teeth, his ruthlessness in his trail of death.

After escaping captivity, the killer shark travels to the island community Cross Point, where prey is in abundance. With an insatiable appetite, heightened senses, and skin impervious to bullets, Scar kills everything that crosses his path. His reign of terror puts him at war with the island sheriff, Nick Piatt.

With the body count rising, Nick vows to protect his island community from the vicious threat. With the aid of a marine biologist, a rookie deputy, and a bad-tempered fisherman, Nick leads a crusade against Scar, as well as the ruthless scientist who created him.