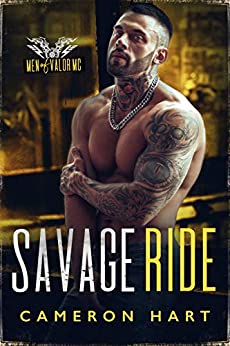 The thick, curvy redhead with bright blue eyes is going to be trouble, I can already tell.

She’s too sweet, too pure, and a reporter to boot. Paige is angling for a story about the dirty cops here in Valor, Wyoming, but she has no idea how far down that rabbit hole goes. My brothers at Men of Valor MC and I have dedicated our lives to protecting our town and rooting out corruption in the police department and beyond.

When I see Ms. Paige Perkins putting herself in danger by trying to hide at one of our stakeouts, I snap. It’s time the curvy little goddess learns exactly where she belongs--beneath me, on top of me, beside me for the rest of our lives.

This month 24 of your favorite short and steamy authors have come together to bring you a new motorcycle romance each day! The Men of Valor are more than ex-military bikers – they know what it means to go the distance for love.
Hop on the back of a bike and hold on tight to your new book boyfriend – it’s gonna be one hell of a ride!