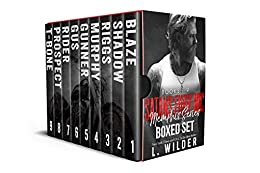 Wallstreet Journal and USA Today Best Seller L Wilder brings readers books 1- 9 in the Satan's Fury MC-Memphis series. This boxed set full of hot, sexy bikers will only be available for a short time. The pre-order price will increase to 9.99 on the day of release.

Blaze – The biker dad falls for a beautiful, young nurse who shows him that some loves are worth fighting for.
Shadow – The club’s enforcer will stop at nothing to save the woman who brought light into his world of shadows.
Riggs – He liked to keep things simple.....no strings, no complications. Then, he met her—the woman who complicated his life in ways he couldn’t imagine, and he knew nothing would ever be the same.
Murphy – The club’s sergeant at arms lived by his rules, and his rules alone. He thought they would prepare him for anything, but nothing could prepare him for the way he felt about her. For her, he’d break his rules—every last one of them.
Gunner - In their world, there are some lines you just don't cross, but for her, he was willing to cross them all.
Gus - The tough as nails president of the Memphis chapter will move heaven and earth for the one woman he's never been able to forget.
Rider- Darcy was the one piece of his past he'd never put behind him.
Prospect- When he came to her rescue, she thought he was a good guy, but she’d soon learn that even a good man could have a dark side.
T-Bone- The club was everything to him. He’d never wanted anything more until he met her. She made him see that some loves are worth fighting for.

Each of the Satan Fury MC-Memphis books are standalones with an HEA and no cheating.