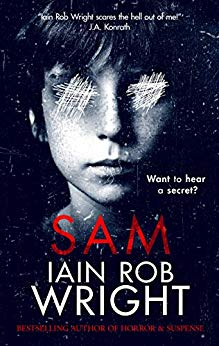 Accidents have been happening at Raymeady Manor.The only suspect is an 8-year old boy.But there's no way a child could be responsible for so much misery... Is there?Sammie has a secret, want to hear it?When washed-up priest Angela Murs and skittish ghost hunter Tim Golding are summoned to a vast countryside estate, they have no idea what to expect. While it's clear that the young resident Samuel Raymeady is a very disturbed child, there's surely no way he could be behind the recent spate of accidents and deaths around his home. He's just a boy... Sammie is dirty, malnourished, and perhaps the victim of a negligent mother, but as Angela and Tim's investigations take them deeper into the mystery, they realize that there is more going on than they ever could have imagined.First came The Exorcist. Then came The Omen. Now there's another creepy child to keep you awake at night. Sam by Iain Rob Wright. You'll never see the end coming."Iain Rob Wright scares the Hell out of me." - J.A. Konrath, author of Origin."Iain Rob Wright is sick and twisted." - David Moody, bestselling authorFrom the authorIRW - Sam is my love letter to movies like The Omen and The Exorcist. It's a claustrophobic little tale set in an English Mansion on a rainy night with a strange little boy and a dark, terrifying secret. It's one of my reader's favourites and Tim and Angela are characters for whom I have a lot of affection.Sam Categories- Horror- Suspense- Mystery- Sci-fi- Mystical- Top 100 Horror