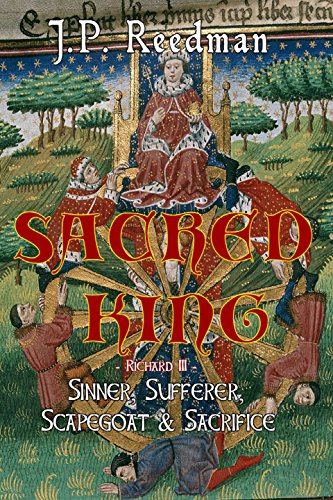 In August, 1485, King Richard III rides on the hunt in Bestwood Park, near Nottingham, and sees a disturbing vision, a man being killed in ritualistic manner, his blood given to the hungry Land. Riding into Leicester with his army several days later, eager to face the invading Henry Tudor and defend his crown, he encounters yet more disturbing omens…the old woman Agnes Black upon Bow Bridge, who prophecies his head will strike the stone upon his return from the field. On the day of battle, the King is betrayed and loses his life in a heroic last charge, his blood falling on the red soil of Redemore Plain….
but that is not the end.
A Lady who walks between Heaven and Hell takes Richard Plantagenet to the Middle Kingdom, like the prophet Thomas the Rhymer many centuries before.
Will he join her band of unearthly knights, or will he find a way to escape from what he sees as purgatory?