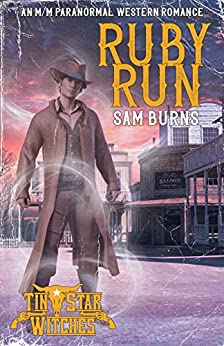 Augustus Ambrose never planned to return to the United States after graduation. His mother’s final letter, with its dire threats about what would await if he did, had been more than enough to keep him away. But when his Aunt Grace dies unexpectedly and leaves him her ranch in the New Mexico Territory, he can’t ignore it. Grace gave him everything, and he can’t let her legacy suffer for his childish fear of his mother.

Griffith Taylor doesn’t want much. Quiet nights on the range, a big blue sky, and no rattlesnakes in his boots. He definitely doesn’t want to travel to Boston to take care of his late boss’s heir. When he lays eyes on his charge, everything changes. Not just because Augie is the best looking greenhorn he’s ever clapped eyes on, oh no.

Someone wants Griff’s new boss dead, and they’re not afraid to use forbidden magic to get the job done. Griff can handle himself in a fight, but this job might be more than he’s prepared for.