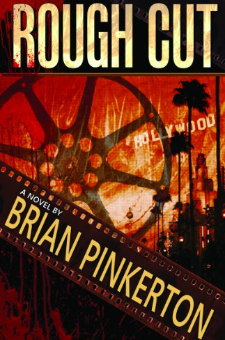 Horror legend Harry Tuttle is desperate for a hit. Harry’s career has been on a painful slide ever since he directed a couple of box office winners in the 1980s. Enter Marcus Stegman, a young unknown with a horror picture of his own. It’s not only a brilliant debut — it’s the movie Harry always dreamed of making. A rivalry ensues — and it’s about to become bloody. A suspicious film critic, beautiful young starlet, and deranged fan become entangled in the cut-throat competition where hungry hopefuls will go to any means necessary to break into the big-time...and no one is safe.“A non-stop thrill ride of twists and turns, Pinkerton winds this prose film spool tighter and tighter until ROUGH CUT reaches the bloody breaking point. Two severed thumbs up!”— John Everson, Bram Stoker Award-winning author of SIREN and THE PUMPKIN MAN“Filled with the set pieces of a Saturday night double feature, ROUGH CUT will tickle all the right bones... before chopping them off.”— W.D. Gagliani, author of WOLF’S EDGE (The Nick Lupo Series) and SAVAGE NIGHTS