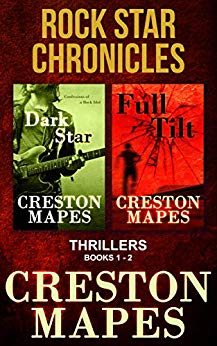 Bad Boy Rocker on Trial - The World is Watching! (Dark Star: Confessions of a Rock Idol, Book 1)Ever since he was a kid from a troubled home growing up on the gritty backstreets of Cleveland, Ohio, Everett Lester longed to be somebody, to make a name for himself, to prove to his parents and the people who looked down on him that he would rise above, make it in this world -- and make it big.Everett's garage band, DeathStroke, played bars, pool halls, and anyplace they could get a paycheck. Then a record label discovered them and the band experienced a meteoric rise to the top of the record charts -- and super-stardom.Despite Everett's unfathomable popularity and riches, he was spiraling out of control into a dark existence where everyone wanted a piece of him. He could find no privacy, genuine friends, joy, or contentment -- even though, in the world's eyes, he had it all.When Everett begins to rely on the services of a personal psychic from L.A. for guidance and solace, he gradually finds a sinister form of evil seeping into his fractured life that threatens to end his career -- and possibly his life.Through it all, he receives uplifting notes from a young lady in Kansas who claims she's not a fan, but a friend -- someone who sees his desperation and depravity -- and is praying for him.A murder trial ensues. The eyes of the world fall on courtroom B-3 in Miami-Dade County, Florida.Grab a front row seat and hold on tight. Dark Star is one of the wildest rides ever encountered in modern inspirational fiction.You Can't Outrun Your Past - Even if You Were a Superstar (Full Tilt, Book 2)Everett Lester, former front-man for the heavy metal band DeathStroke and one of the world's most recognized celebrities, has turned over a new leaf. The Living Water Tour will take Everett back on the road as he performs his music for a new cause -- but he quickly learns that outrunning his dark and tumultuous past will be impossible.Everett's wife, Karen, has received news that has rocked their world.Everett's gambling-addicted brother Eddie and the rest of his deteriorating family greet Everett's new ambitions with hatred and disdain. And when the Mob closes in on Eddie, Everett and Karen are dragged into a nightmare-like world of unthinkable threats and diabolical violence.As if that wasn't enough, Eddie's son Wesley blames Everett for his brother's death. When Wesley hooks up with psychotic Tony Badino, the two meth-heads and their gang will stop at nothing to bring Everett down -- and whoever else they need to take with him.Will Everett and Karen survive the aftermath of a rock idol's life?Before you find out, take a word of advice from best-selling author Bill Myers: "FULL TILT takes readers on one serious roller-coaster ride. Hang on!"