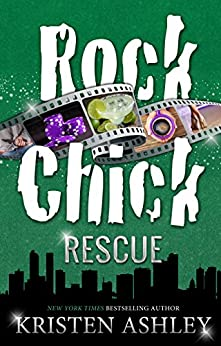 Jet McAlister has a secret. Eddie Chavez has the hots for Jet (not to mention Eddie’s just plain hot). Jet has too many problems to realize that Eddie’s interested. Eddie loses patience when Jet ends her waitressing shift at a strip club with a knife at her throat. Since Eddie’s a cop, he figures he can help. Since Jet’s used to solving everyone’s problems she doesn’t want Eddie’s help.Throw in a Dolly Parton look-alike, a gruff but lovable strip club owner, Jet’s ne’er do well father, his ne’er do well friend, Bear, Bear’s long-suffering, chain-smoking wife Lavonne and the crew from Rock Chick and you’ve got Rock Chick Rescue.Rock Chick Rescue takes you on a wild ride with Jet, Eddie and the gang as they wrestle bad guys in a bagel shop, hit Denver’s backstreet poker tables (with big hair), and help the strippers at Smithie’s take down a would-be murderer.Through this, Jet’s got to learn that even when life made you give up your dreams, you can still end up with the (hot) guy. Eddie’s got to rescue Jet from a bad man (so he can do better things with her) and teach her that some dreams can come true.