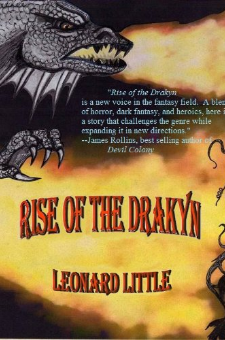 Forgotten by his grieving father and bullied by his older half brother, Marcus is ready to leave home after his fourteen birthday celebration which legally makes him an adult. However after cutting his thumb on a knife gifted from his uncle, he handles an amulet left to him by his mother. His blood activates the amulet which awakens the magic of his linage, allowing him to communicate with trees and animals, but it also alerts the evil forces that an heir to the Dragon throne still exists. The usurping Dark Lord sends his wind weaver to release the drakyn—undead dragons—to hunt and kill Marcus. His beloved grandfather and others are lost when the drakyn attack burn Marcus’ vineyard home. Warned by the trees, he escapes with a ragtag band survivors. The fire-breathing monsters, joined now by an army of sea-going raiders, pursue him, taking captives, burning and pillaging every place Marcus tries to hide.Dressed as a girl to hide from his pursuers, Marcus helps a couple of teenagers with a dragon, search for their lost family members in the aftermath of the drakyn attacks. He makes friends and even finds love along the way, but betrayal lands the teens in an underground trap. The entrance tunnel collapses on Marcus while the rest of his team is captured and sent to the wind weaver’s torturous prison.For most of his life Marcus has run away from his problems. Faced with the inevitable torture of the girl he loves, he must somehow dredge up enough courage to rescue her. However, he’s still buried under a ton of rock, so he'll have to use his new-found magic to save himself first."Rise of the Drakyn is a new voice in the fantasy field. A blend of horror, dark fantasy, and heroics. Here is a story that challenges the genre while expanding it in new directions."--James Rollins, best selling author of Devil Colony and Bloodline"Vampire dragons, baby-killers, blood, gore, massive destruction, and a cross-dressing hero! This book's got it all!"--Morgan Blayde