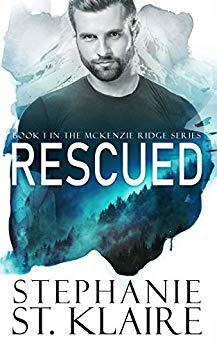 From bestselling author Stephanie St. Klaire comes the shocking beginning of a 5-star series, McKenzie Ridge. Dawson and Sam kick off this standalone romantic suspense series that you won’t want to put down...until you’re ready to binge read the rest. All FIVE books are available now!It isn’t just love on the line, it’s lives too…Local EMT Dawson Tayler and ER nurse Sam - not short for Samantha - had one thing in common...they didn’t date. Ever.Dawson thought relationships were more work than they were worth and Sam thought men were as necessary as a hangnail. She had already been on the wrong end of rejection and found herself left with more than a broken heart, and he thought the past was best left right where it was. Sterile hallways and blaring sirens lead to a series of end of shift non-dates over apple fritters that become more than either is willing to admit - until their past and present collide…Secrets and lies are revealed when tragedy strikes putting everything on the line - including lives - as their romance rushes through suspenseful, and sometimes dangerous, twists and turns.Will Dawson and Sam find a happily ever after, or is there someone else lurking in McKenzie Ridge, trying to destroy it all?