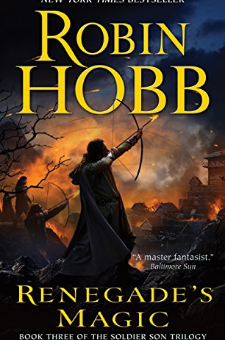 Loyal, privileged, and brave, Nevare Burvelle proudly embraced his preordained role as soldier in the service of the King of Gernia—unaware of the strange turns his life would ultimately take. Exposed to a plague of enemy sorcery that felled many of his compatriots, he prevailed, but at a terrible cost to his soul, body, and heart. Now he stands wrongly accused of unspeakable crimes—including murder, the most heinous of them all.

Condemned by his brother soldiers and sentenced to death, Nevare has no option but to escape. Suddenly he is an outcast and a fugitive—a hostage to the Speck magic that shackles him to a savage alter ego who would destroy everything Nevare holds dear. With nowhere to turn—except, perhaps, to the Speck woman Lisana, the enemy whom he loves—he is mired in soul-rending despair. But from out of the darkness comes a bright spark of hope.

Perhaps, somehow, the hated magic that has long abused Nevare can be used by him instead. Could he not learn to wield this mighty weapon for his own purposes rather than be enslaved by it? But down what perilous road will this desperate new quest lead him? And what will be the outcome and the ultimate new incarnation of Nevare Burvelle?