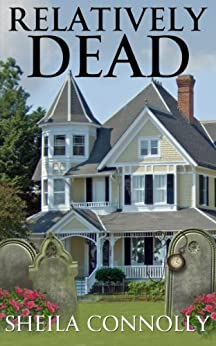 The New York Times bestseller from author Sheila Connolly!Abby Kimball has just moved to New England with her boyfriend and is trying to settle in, but the experience is proving to be quite unsettling, to say the least. While on a tour of local historic homes, Abby witnesses a family scene that leaves her gasping for breath—because the family has been dead for nearly a century. Another haunting episode follows, and another, until it seems to Abby that everything she touches is drawing her in, calling to her from the past. Abby would doubt her sanity if it weren’t for Ned Newhall, the kind and knowledgeable guide on that disturbing house tour. Rather than telling her she’s hallucinating, Ned takes an interest in Abby’s strange encounters and encourages her to figure out what’s going on, starting with investigating the story of the family she saw . . . and exploring her own past. But as Abby begins to piece together a history that’s as moving as it is shocking and unravels a long-ago mystery that nearly tore her family apart, she also begins to suspect that Ned’s got secrets of his own, and that his interest may be driven as much by a taste for romance as a love for history. "This book kept me hooked until the very end, and even then I wanted more of it. The storyline . . . is original and fun." --Simply Bookish"I really enjoyed this little paranormal mystery and loved the storyline. Ms. Connolly created interesting characters that I wanted to learn more about." --Night Owl Reviews About the Author:Sheila Connolly is an Anthony and Agatha Award–nominated author who writes three bestselling cozy mystery series: the Museum Mysteries, the Orchard Mysteries, and the County Cork Mysteries, which includes Buried in a Bog and Scandal in Skibbereen, both New York Times bestsellers. In addition, she has published Once She Knew, a romantic suspense; Reunion with Death, a traditional mystery set in Tuscany; Relatively Dead, a paranormal romance and a New York Times bestseller; and Seeing the Dead, as well as a number of short stories. She lives in Massachusetts with her husband and three cats and travels to Ireland as often as possible.