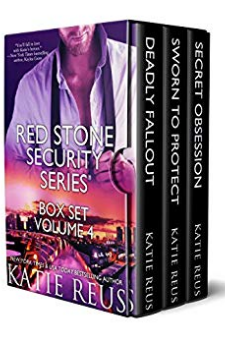 Sexy. Sinful. Suspense. Sparks fly and so do bullets in the USA Today bestselling Red Stone Security Series! This collection includes the following three romantic suspense titles by Katie Reus:Deadly FalloutZoe’s stalker has been murdered, but now she’s in more danger than ever before. Former Navy SEAL Sawyer McCabe might not know the gorgeous Dr. Hansen as well as he wants to, but he knows all about trouble. So when Zoe is threatened, he steps in to help her regardless of the consequences. But it’s not enough to escape a determined killer. As the danger closes in they have to trust each other if they want to stay alive. And Sawyer’s determined to do whatever it takes to keep Zoe safe and in his arms. Because Zoe is worth risking everything for.Sworn to ProtectQuinn’s worst mistake was walking away from sweet, sexy Athena when he learned she was a virgin. Now his past has come back to haunt him. The man Quinn put behind bars has been released from prison and is out for blood. Quinn took years of the man’s life and helped his abused wife flee so now the ex-con is hellbent on using Athena to make Quinn pay. Refusing to lose her again, Quinn will do anything to save her. Even if it means risking both his life and his heart.Secret ObsessionSince she moved to Miami, Raegan Taylor has wanted Ford Burke—a sexy and rugged cop. He's everything she's ever wanted. Unfortunately for her, he’s kept his distance. But when a night out goes extremely wrong, his protective instincts kick into high gear, and he finds himself fighting for her in more ways than one. Because someone else wants Raegan—and if he can't have her—nobody can. He's waiting. He's watching. He's lurking. Ready to strike. He'll make her his. He'll take down anyone who gets in his way—even a cop.Length: 131,000 wordsAuthor note: Each of these titles can be bought individually or part of this box set.