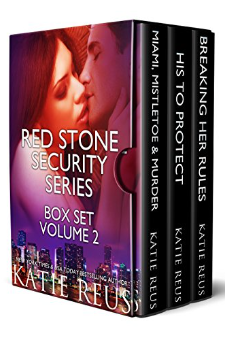 The USA Today bestselling Red Stone Security Series Box Set (Volume 2) includes the following three romantic suspense titles by Katie Reus:Miami, Mistletoe & MurderFierce and sexy, former Marine Travis Sanchez has always held himself back from the rest of the world, using his tattoos and piercings as armor. But when the woman he’s wanted for months is threatened, he knows it's time to strip away the bad boy image and show her just how much he wants to be with her. As one of Red Stone Security’s best contractors, Travis is trained for almost any situation. But nothing prepares him for the most dangerous threat of all: the one to his heart. Kind-hearted Noel Baskov’s only wish for the holidays is that her Miami coffee shop has a successful Christmas season. But her focus on work is interrupted when the family of the young girl she mentors is threatened, and the man she’s been lusting after for months steps in to handle it. Unfortunately the danger is far from over. Can this sexy and mysterious warrior protect Noel, or will he be the one to shatter her heart?His to ProtectNo woman ever affected Red Stone Security expert Kell Malone quite like Charlotte Bastien. It’s been a year since that incredibly intense night they spent together and he still can’t get her out of his head. When he discovers she’s in Miami—with their three-month-old son—he’s stunned. Hurt. He’s also determined to know his child, and if she’ll give him the chance, to make a life with the stubborn woman who has sworn off love.Single mom Charlotte came to Miami to tell Kell about their son, and that’s all—she won’t open her heart just to have it trashed by another man. Unfortunately, Kell makes that hard. He’s everything she wants, and just one look from him unleashes wicked memories and wild desires. When she witnesses a murder and lands on a hit list, Kell steps up to protect her and their son, but winning her love proves to be the hardest mission he’s ever undertaken.Breaking Her RulesIris Tarango is a small-town girl from the wrong side of the tracks; she’s also a decorated former Marine who fought hard to become one of Red Stone Security’s most respected agents. But her perfectly ordered life is turned upside down when she’s assigned to guard the sexy, dominating tycoon she shares a secret history with. The instant Iris walks back into the billionaire’s diamond-studded orbit, the wild attraction flares between them…and her reputation, objectivity, and heart are in trouble.After an attempt on his life, business magnate Wyatt Christiansen calls in major favors to hire Iris as his bodyguard. He knows she’s the best, though he has another motive, too. He sees this as his final chance to win her heart. But when danger spins out of control, all Wyatt can think of is getting Iris out of harm’s way—even if it means losing her love in the end.Unfortunately, the killer seems to know their every move. If Wyatt and Iris don’t figure out who put out the hit, they’ll lose more than their chance at happiness together.Author Note: Each title can be purchased individually or as a box set.Collection: 108,000 words