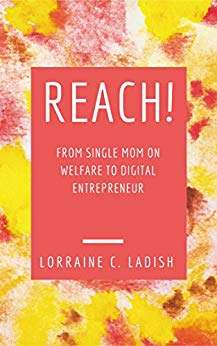 In one swoop Lorraine found herself separated from her husband, unemployed, broke and in debt with two young daughters in tow. Just days from being homeless, she was forced to sell her family heirlooms to pay the rent and had to apply for welfare and accept charity from friends and acquaintances.Then she began to blog.In REACH! Lorraine tells her story in harrowing detail, and how, at the age of fifty and with a $500 investment, she launched Viva Fifty! an online magazine that celebrates bicultural women 50+, which became profitable with a year and is now her whole source of income.Told in a friendly, conversational tone, REACH! is a book for those going through a difficult time in their lives and are in need of inspiration, as well as for anyone starting a digital business.