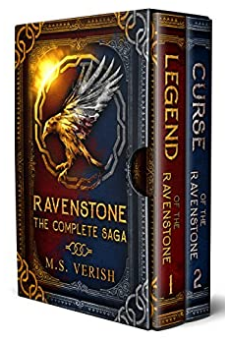 Ravenstone: The Complete SagaBoth novels in one volume!Legend of the Ravenstone and Curse of the Ravenstone**Bonus Short Story Included**The Hawk's Shadow: A Tale from SecramoreThey were destined for failure.When a mysterious and manipulative wizard, learns the deadly relic know as the Ravenstone has been uncovered by a self-proclaimed regent known as the Priagent, he hastily assembles a group of mismatched travelers to steal and deliver it to safety. The unlikely company sent to retrieve it consists of Arcturus, an exiled politician with a fondness for wine, Kariayla, a winged slave girl on a quest for redemption, Jinx, an unlucky thief and his imp counterpart, and Hawkwing, the wizard’s personal spy, at the helm.Distrust, secrets, and inexperience threaten to compromise the mission as the group is forced to travel in the company of the enemy. Doubt turns to the wizard who employed them on this precarious quest, and as the Priagent marches toward his goal, a second Cataclysm is imminent. Yet even he is driven by another—a darker force that has yet to reveal itself.The Ravenstone's ominous Shadow obscures the fate of Secramore, and unless the threat is vanquished, none will be spared the curse of its darkness.