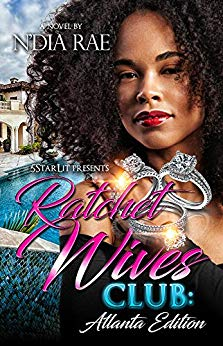 Side Chicks.Infidelity.Greed.Wives of Atlanta's Biggest Ballers...All holding dark secrets...they're ratchet!AriaMarried to ATL's biggest kingpin Czar, she is a paraplegic confined to the wheelchair for life after one of her husband's rivals shoots her. Still bitter about her predicament she cheats on Czar with Nokio, her husband's corner boy, and plots to take over his empire. Cipirana.Gorgeous BBW that's not appreciated by her husband Braxton, who is soon to be the mayor of Atlanta. After years of neglect, disrespect and abuse from Braxton she she takes comfort in Javi, Czar's right hand man. Apryl.She is Cipriana's little sister and an undercover detective cop. Apryl is also the wife of a former cop turned law school student by the name of Kazman. When Kazman is struck in a car accident and placed in a coma, Apryl is left to pay all of their bills. To help she takes on extra undercover work, investigating Czar. When she meets Czar she is immediately attracted to the powerful kingpin. But what about her husband in the coma?MayekaIs a former stripper turned baby mama to one of the city's most powerful men, Braxton Nicks. Braxton Nicks is a councilman running for mayor who is also married to Cipriana. As Mayeka's son get's older the more she wants Braxton all to her self but she she is hiding a dark secret from him too. All four women's lives are entangled in this juicy tale of drama, lust and secrets. Are you ready for this crazy rollercoaster ride?