Radioactive and the Decay (Boxed Set) 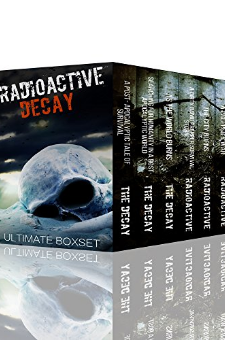 A complete boxset of two Best Selling Dystopian Novels- Over 700+ pages of fast paced post-apocalyptic action!Radioactive-Southern California is home to sand, surf, and fun in the sun. Jim Farr, a former Naval Intelligence Officer, owns a maritime mechanics company and works as a contractor for the San Diego Naval Base. It’s a normal day on the job until explosions go off. With the Naval Base destroyed, and word of attacks happening around the country, Jim has to get to his sister in Phoenix… But that’s just the beginning. Follow Jim along in this three-part action packed series and find out just what happens when the bombs go off.The Decay-A nearby nuclear attack rocks a small town in Pennsylvania, sending one man, Paul, and his step-daughter, Julie, on a perilous journey of survival. What started out as a normal Friday afternoon soon shatters into a race for survival against the odds upon the loss of communications—cell phones, Internet and electricity—as a result of the nation’s downed power grids. Paul attempts to get in contact with his wife, Samantha, who is away on business in Colorado, but soon discovers that his only option is to travel cross country amidst the chaos of strategically timed nuclear attacks along the East Coast.