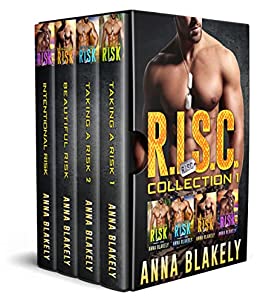 TAKING A RISK, PART ONE:

Jake McQueen can handle anything except losing the only woman he's ever loved. As the owner of a black ops private security firm, he worries the evils of his world will invade Olivia's, so he keeps his true feelings for her hidden. But despite his efforts against it, danger finds Olivia in the worst of ways, and Jake and his team will risk it all to save her...before it's too late.

After narrowly escaping a fate worse than death, Olivia Bradshaw gets second chance at life, and miraculously, love. Together, she and Jake embark on a journey of discovery and survival. But if they can't outrun the men hunting them, the future they've dreamed of will be lost to them both forever.

They thought she was safe, but someone still wants her dead.

R.I.S.C. operative Jake McQueen left Olivia to end the threat to her once and for all. Now he's back and ready to take their relationship to the next level, but before they can do that, he must confess his greatest sin. One that may end up costing him everything.

Olivia Bradshaw survived hell, but she didn't do it alone. When the man of her dreams returns, the future she and Jake have both longed for is finally within their reach. But when a decades-long secret is revealed, Olivia's entire world turns upside down. And when the monster who's been watching her makes his move, Jake and the other members of R.I.S.C.'s Alpha Team must race against the clock in order to to save her...and their future.

He doesn't believe he's worthy of love. She makes him see the truth.

Former Delta Force operator Trevor Matthews has spent a decade haunted by the sins of his past. He keeps his mind on his job and his heart close to the vest. Then he meets Lexi. The beautiful waitress with an angelic smile ignites a spark deep inside, making him crave a life he never thought possible.

After losing everything that mattered to her, Lexi Hamilton spends her days waiting tables and praying for tips. Busy clawing her way back to the life she aspires to have, the last thing Lexi expects is to fall in love. That all changes the moment she meets Trevor.

When the hunky private security expert protects her from a dangerous situation, Lexi and Trevor form an immediate, unbreakable connection. But just as Trevor is ready to give love another try, he realizes someone wants Lexi dead. Forced to face the demons from his past, he'll stop at nothing to save the woman he loves.

He'll move heaven and earth to keep her safe.

As a former SEAL and now Alpha Team’s technical analyst, Derek West is all about the numbers. But when this Texas native unexpectedly bumps into the one that got away, he’s determined to beat the odds. Derek wants to make Charlie a part of his life again—especially when he discovers she’s been living with a monster.

To others, Charlotte “Charlie” Porter’s elaborate life seems picture-perfect. Then again, no one truly knows what goes on behind closed doors. After a chance meeting with the one man she’s never been able to forget, Charlie begins to dream of the road not taken. Unfortunately for them both, it’s a road that could prove to be lethal.

When Derek shows up just when she needs him most, Charlie finally breaks loose from her husband's abusive clutches. But as she and Derek begin to explore what could’ve been, these friends-to-lovers realize Charlie is in more danger than ever before. With an obsessive killer out to destroy their second chance, Derek will risk it all to save the woman he loves. Read more