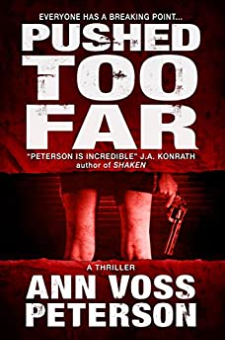 A TOWN'S TERRIBLE SECRETTwo years ago a woman was brutally murdered, her body burned until only ash and shattered bone remained. Police Sergeant Valerie Ryker solved that case, putting psychopath Dixon Hess in prison for life, and becoming the first female police chief of her tiny Wisconsin town.A COP'S UNFORGIVABLE MISTAKEThen the original murder victim turns up in a frozen lake, all in one piece and only recently dead, and Val must enter a race against time. In only forty-eight hours, Hess will be set free, and he wants payback. And Val, her town, and everyone she loves are at the top of his list. A KILLER'S NEXT VICTIMBut surviving Hess's vengeance is only part of her dilemma. For there's another killer in Lake Loyal. One who may be closer to Val than she knows... Val will need all the help she can get, including a sexy firefighter, her dead sister's daughter, and a tough Chicago cop named Jack Daniels. Everyone has a breaking point, and Val has just reached hers.From bestselling romantic suspense author Ann Voss Peterson comes a page-turning thriller of police procedure, passion, and revenge. Make sure you're holding your Kindle tightly with both hands."If you're a fan of Tess Gerritsen, James Patterson, or Kathy Reichs, don't even hesitate. Filled with nail-gnawing suspense, dark mystery, and even a dash of sexy romance, PUSHED TOO FAR qualifies for Thriller of the Year." - J.A. Konrath, author of SHAKEN"I finished Ann Voss Peterson's PUSHED TOO FAR in a machine-gun clatter of next-page clicks. It jumps out of the gate at full gallop and picks up speed from there. I couldn't go back to working on my own book till I'd finished hers." - F. Paul Wilson, New York Times Bestselling Author "This book is written by someone who understands the art and craft ofthriller writing. It's got three-dimensional characters, a mystery with lotsof twists and turns, an interesting setting, and the research always flowssmoothly into the story. It's not just about murder and revenge, it's alsoabout a woman police chief weighed down by problems in her job and in herpersonal life. And I didn't see the final twist coming! All in all-agreat job by a writer to watch." - Rebecca York, New York Times Bestselling Author