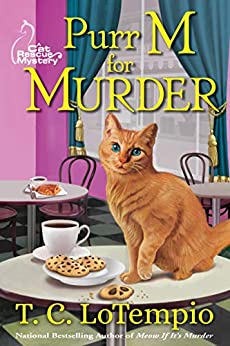 Join amateur sleuth Sydney McCall and her savvy orange tabby as they pounce on their first case in this “clever, fast and fun” cozy mystery series opener (Suspense Magazine)

Sydney McCall left behind an ex-fiancé and a New York advertising job to return home to Deer Park, North Carolina and help her sister, Kat, run the local animal shelter, Friendly Paws. Determined to save the shelter from financial trouble, Sydney and Kat organize a cat café fundraising event at a local coffee shop. Things are looking up until their landlord, Trowbridge Littleton, threatens to shut down the event. When Sydney drops by his art gallery to make peace, she finds Kat—along with Littleton's dead body.

Local homicide detective Will Worthington—who just happens to be Sydney's old high school crush—is highly suspicious of the sisters' involvement. Desperate to clear their names from the suspect list, Sydney pounces on the investigation. With the help of one of the shelter cats, a savvy orange tabby named Toby, Sydney begins poking her nose into other local businesses whose owners may have benefited from Littleton's death—until the killer notices she's pawing a little too closely at the truth.