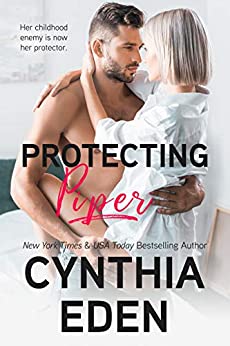 Eric Wilde has always known that Piper Lane isn’t for him. She is his younger brother’s best friend…and probably more. But that hasn’t stopped Eric from wanting her, from longing for the one woman that he can’t have. Sure, he’s rich, successful—he’s built a security empire, and he’s got the world at his feet. Only he doesn’t have her.

He is the one man she needs the most.

Free-spirited Piper Lane has always considered Eric to be the enemy. He’s seemed to resent her, and the guy just flat-out makes her nervous. Every time she’s around him, she winds up doing something horribly embarrassing. But, this time…everything has changed. This time, he’s the one man she needs the most.

Something is stalking Piper.

A stranger has broken into Piper’s home twice, and she feels like someone is following her. Watching her every move. She needs a professional to help her—so enter Eric Wilde. He promises her protection, he promises to put his best investigators on her case, and he even moves her into his house. Suddenly, the guy who has always been the villain in her life…he’s now playing the role of hero.

Everything will change as the danger mounts.

And maybe Eric isn’t so bad, after all. The more time that Piper spends with him, the more she realizes that her feelings for Eric are far more complicated that she ever imagined. Desire explodes between them even as the danger deepens around her. Someone in the dark is targeting Piper, and he is determined that if he can’t possess her…then he will destroy her.