Portrait of a Gossip 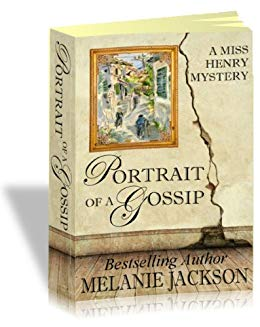 The first book in Melanie Jackson's new Miss Henry Mystery Series."Melanie Jackson is a talent to watch."--WritersWrite.comJuliet Henry, water-color artist and retired agent of the NSA, wouldn't stack up her knowledge of the human heart against the great romantic poets, but she knows a thing or two about human avarice and stupidity. It comes as no great surprise when the small artists' colony of Bartholomew's Woods ends up with a dead resident. Harvey Allen was a professional gossip, hated the length and breadth of the state for his scandal-mongering in the press, and it seemed that one of Juliet's talented but idiosyncratic neighbors had finally had enough of his pernicious tale-bearing and decided to paint him out of the picture. Juliet may sympathize, but she also knows that once a person resorts to murder to hide a secret, chances are good that they may choose to kill again. Can she find the murderer before the killer paints the town red?Move over Miss Marple, there's a new slueth in town. If you are a fan of Ngaio Marsh or Agatha Christie you are going to love Juliet Henry and the residents of Bartholomew's Woods.Mystery SeriesChloe BostonButtersctoch JonesWendover HouseMiss HenryHistorical MysteriesDeath in a High PlacePraise for the Author"A wickedly sexy tale!"--Christine Feehan, New York Times Bestselling Author (on The Selkie)"... delivers sizzling romance and ghoulish thrills at a breathtaking clip."--Publishers Weekly (on Traveler)"Readers of Laurel K. Hamilton will enjoy this complex tale..."--Booklist (on Still Life)About the AuthorMelanie has been writing her entire life. In fact, one of her earliest fond memories is receieving an IBM Selectric typewriter for her birthday. After publishing romance novels (scottish historical and paranormal) for New York based publisher Dorchester Publishing from 1999 to 2010, Melanie chose to begin self-publishing cozy mysteries. Since then she has released the Chloe Boston, Butterscotch Jones, Wendover House, and Miss Henry Mystery series.Melanie Jackson is the award-winning author of more than seventy novels, novellas and poems published in various languages. She lives with her writer husband, her bossy cat and spoiled dog in the Sierra foothills where it is almost impossible to grow pumpkins (or anything else the deer like). Besides gardening, she is involved with animal charities.Three times nominated for RT's Reviewers' Choice Award.Twice nominated for RT's Lifetime Achievement Award.***If you're looking for mysteries in other series by the same author, simply search for "Chloe Boston", "Butterscotch Jones", "Wendover House", or "Miss Henry".