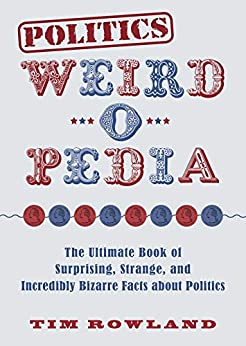 Government and politics might seem twisted today, but they’ve always been strange.

There’s something about public office that, throughout time, has transcended normalcy. Politics Weird-o-Pedia presents some of the oddest and most interesting political absurdities and tidbits from around the world, from Peter the Great’s tax on beards to a lawmaker’s mistress whom he kept on the congressional payroll despite her admission that “I can't type, I can't file, I can't even answer the phone.”

Some of America’s Founding Fathers wanted to jail newspaper reporters. A Mongolian conqueror liked to build cement walls out of the bodies of his vanquished opponents (while they were still alive). An all-female resistance to nuclear missiles in Britain resulted in a protest that lasted for nineteen years—long after the missiles were gone.

Politics Weird-o-Pedia doesn’t stand still for a minute. It is intriguing, funny, and occasionally startling. It is more than a collection of trivia, adding bits of context and historical vignettes that make it clear that no matter how dysfunctional politics and government might seem today—we’ve been through it all many times before.