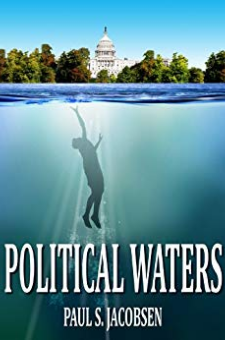 Money and politics leads to corruption… and murder. While at his wilderness cabin, lawyer-turned-fishing guide Karl Boyd overhears a phone conversation revealing the vote-selling plot of Senate aide Iva Richter. He tries to ignore what he heard because law and politics drove him to the bottle and to divorce. But loyalty to his old friend, Senator Miles Ramsey, forces him to uncover Iva Richter’s political scheme.To save her plan, Iva Richter brutally tries to silence Boyd, forcing him to use his wilderness skills to battle the harsh Ontario wilderness, and she later uses her political power to thrust him into the crosshairs of Canadian organized crime and the FBI. In the end, among the monuments of Washington, D.C., Boyd strives to save his loved ones and expose a conspiracy which, in its brilliance, would have put Richard Nixon and his men to shame.Political Waters is a complex political and adventure thriller, taking the reader on a page-turning journey from the Canadian wilderness to the U.S. Capitol. It follows the life-and-death battle between a powerful woman bent on revenge and an ordinary man who gets in her way…and who finds the power of family and redemption in the struggle.