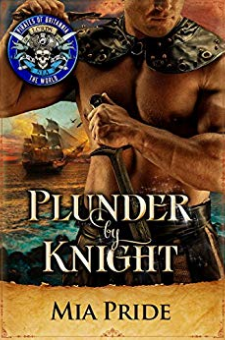 Read Book 7 in the Pirates of Britannia Connected World series. Pirates have never looked so sexy or so exciting!Torn between duty and dreams….Born of Irish pirates but raised to be an English Knight, Thomas Esmonde is a man stuck between two opposing worlds. His lingering Irish accent never afforded him many friends at the English court, nor has he ever wished to conform to their overbearing rules and stuffy societal expectations. Reoccurring dreams of ancient treasure and a yearning for life on the high sea are at odds with his hard-earned honor and knightly duties.But when he is sent to Ireland to aid the English cause, he is immediately thrust into his previous life as his ship is captured by the infamous Pirate Queen of Ireland, his grandmother. Faced with the temptations of gold, adventure, women, and plunder, his loyalties are split between his family and his queen… then split further when he captures his enemy’s beautiful, yet mischievous daughter.Longing for freedom and adventure…With her mother dead and her father fighting the Irish rebels, Katherine Bingham is often left lonely and unattended, spending her days watching the pirates of Clew Bay from afar and dreaming of adventure. Born an English lady but raised on Irish soil, she wishes to aid the people she considers her own, even daring to steal from the pirates to do so… until the night she is caught by the most handsome, yet frightening pirate she has ever seen.Born to be enemies, Katherine and Thomas cannot deny the attraction and deeper connection pulling them together as they discover their shared goal: Freedom for Ireland. But, to keep Katherine for himself, Thomas will have to defy his queen, his family, and his country. One act of revenge led him to the love of his life, but can he keep her without losing his honor, or his head?