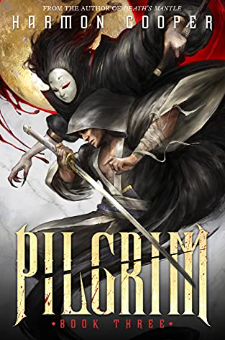 A former assassin. An unspeakable past. His blood unleashed.

No matter which way Danzen Ravja turns, someone wants to kill him or exploit his demonic powers. When his monastery in Genshin Valley gets too crowded, Danzen once again travels west with his yokai companions, Jelmay and Kudzu, in the hopes of spending some time in the north to bend his echo.But disappearing isn't going to be as easy as it seems.With new foes around every corner, Danzen will be forced to his limits unless he learns how to control his demons, and this isn't to mention the sudden appearance of his father, the ruler of Diyu, of hell itself, who has warmed to the idea of Danzen taking his throne.

is a bestselling progression fantasy/cultivation series inspired by the

comics, and the movie

Get immersed in the world of Danzen Ravja, in a story that blends concepts of Eastern cultivation with Japanese mythology. The Pilgrim series is a different take on progression fantasy through its unique echo cultivation system and its usage of yokai and other fantastical creatures as main characters. Expect sudden and fast-paced action, incredible danger, mystery, and powerful scenes as Danzen learns to navigate his new powers and unlock a potential he never knew possible.