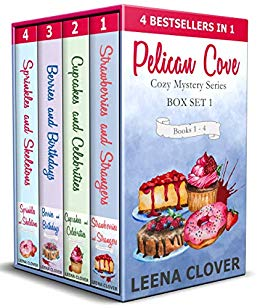 SAVE 80% with this BOX SET>>> Read FREE with KINDLE UNLIMITED <<<'This is truly the Best Cozy Series around!'If you like reading about strong women, small town life, friendships that endure and yummy food with a side of murder, you will love the Pelican Cove Cozy Mystery series.Dumped by her cheating husband, 44 year old Jenny King arrives in the remote island town of Pelican Cove. At her aunt's urging, Jenny starts working at the Boardwalk Cafe, slowly rebuilding her life. Her delicious cakes and muffins make the town famous, drawing tourists from far and wide.Jenny will form lifelong friendships with the local women. And she might even dare to love again.This cozy mystery anthology brings you fast paced murder mysteries with twists and turns and plenty of suspects and red herrings. Every book in this set has been a bestseller and has entertained thousands of readers.STRAWBERRIES AND STRANGERS BOOK 15 stars - 'A great first book in a new Cozy series!'Exclusive beach party takes a murderous turn.When Jenny's aunt, a local artist, is accused of killing a stranger, she is forced to set her apron aside and put on her sleuthing cap. Jenny battles with the cranky local sheriff and quirky local characters to get to the truth.CUPCAKES AND CELEBRITIES BOOK 25 stars - 'A real page-turner and very hard to put down!'Celebrity groom is prime suspect in shocking murder.Nothing's going right for Heather's TV star cousin. Her wedding at the Pelican Cove Country Club is canceled. Her musician groom is being investigated in a suspicious death. Eager to tie the knot soon, she talks Jenny into helping her out.BERRIES AND BIRTHDAYS BOOK 35 stars - 'Outstanding read. This series just keeps getting better.'July 4th parade ends in 100 year old's gruesome murderThe Pelican Cove police are clueless about why anyone would murder a 100 year old man on his birthday. With most of the victim's large family admitting they hated him, Jenny decides the obvious suspects are innocent. She will pursue the most unlikely string of clues to uncover a mystery that spans generations. Her startling discovery will shock the entire community. Can she apprehend the murderer in time?SPRINKLES AND SKELETONS BOOK 45 stars - 'Couldn't ask for anything more in a book. Felt like I was in the book with the characters.'Skeleton in rose garden halts celebrations at beach house.When an unexpected guest turns up at Jenny's housewarming party, the turbulent history of Seaview is finally revealed. As more and more truths about the house surface, everyone except Jenny believes her house is jinxed. Jenny's ownership of Seaview is questioned when the prodigal heir comes knocking. Jenny is a suspect in murder!>>> Read FREE with KINDLE UNLIMITED <<