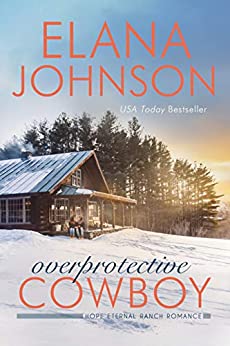 Cowboys looking for a second chance at life, love, and happiness.

Ted Burrows is ready to start his life over again, even if he has to go to a work-parole ranch to get out from behind the walls that have caged him for the past thirty months. He's got a contact at Hope Eternal Ranch, and the day he gets word that he'll be released into the Residential Reentry Program and serve out the rest of his sentence under the open sky of the ranch is the best day of his life so far.

But when he meets Emma Clemson, he's completely thrown off his game. He knows her...from somewhere. She doesn't seem to recognize him, though, and as they work together on the organization of the programs and tourism of the ranch, their newfound flame flickers and brightens.

Emma has managed to isolate herself on the ranch and keep her ex out of her life, and she's finally achieved some level of peace and happiness. Ted's name does tickle a memory, but she pushes against it as she wants to leave the past where it belongs—in the past.

When Emma's ex-boyfriend comes back into her life and reminds her of who Ted is, her carefully constructed existence unravels. She and Ted have met before, and not under pleasant circumstances. She's not that woman anymore, and she doesn't want Ted to even think of her as the woman she'd once been. She knows he's not the same man he was a decade ago either.

When he sees Emma's unrest, Ted's overprotective side kicks in—a side that has gotten him in trouble before...

Can Ted and Emma face their pasts so they can truly be ready to step into the future together? Or will everything between them fall apart once the truth comes out?