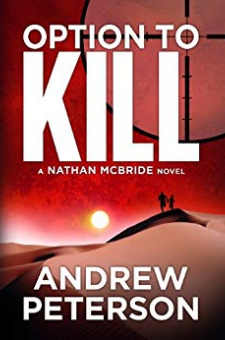 Nathan McBride, “the most brutally effective thriller hero to appear in years” (Ridley Pearson, author of Killer Weekend), returns in the third installment of one of the best new series in thriller fiction.When Nathan McBride receives a text message from someone who claims she’s been kidnapped, it triggers a deadly chain of events that has the potential to haunt him for the rest of his life. Nathan will soon learn that nothing from his past could ever prepare him for the crisis he’ll soon be facing. The girl’s name is Lauren and she’s just twelve years old. With virtually no experience with children, Nathan’s patience and compassion are about to be tested to their limitsIn a violent confrontation, Nathan rescues Lauren from her kidnapper, but as he unravels Lauren's story, he realizes his troubles are only beginning. She says she's in the Witness Security Program, and doesn't trust the US Marshals because she thinks they're complicit in her abduction. Not only that, her stepdad was murdered last night.In a desperate and unlikely alliance, Nathan and Lauren must stay one step ahead of her kidnapper and the brutal mercenaries who will kill anyone who gets in their way. Played out over the course of 36 lightning-fast hours, Nathan and Lauren must learn to trust each other or they won’t survive.This book was initially released in episodes as a Kindle Serial. All episodes are now available for immediate download as a complete book. Learn more about Kindle Serials