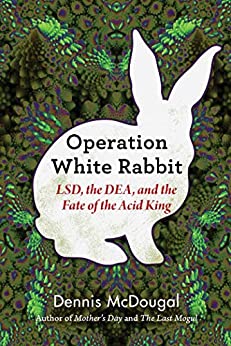 A search for the truth behind the DEA’s life imprisonment of acid's most famous martyr.

Operation White Rabbit traces the rise and fall—and rise and fall again—of the psychedelic community through the life of the man known as the “Acid King:” William Leonard Pickard. Pickard was a legitimate genius, a follower of Timothy Leary, a con artist, a womanizer, and a believer that LSD would save lives. He was a foreign diplomat, a Harvard fellow, and the biggest producer of LSD on the planet—if you believe the DEA.

A narrative for fans of Michael Pollan’s How to Change Your Mind, Pickard’s personal story is set against a fascinating chronicle of the social history of psychedelic drugs from the 1950s on. From LSD distribution at UC Berkeley to travelling the world for the State Department, Pickard’s story is one of remarkable genius—that is, until a DEA sting named “Operation White Rabbit” captured him at an abandoned missile silo in Kansas. Pickard, the DEA said, was responsible for 90 percent of the world’s production of lysergic acid.

The DEA announced to the public that they found 91 pounds of LSD. In reality, the haul was seven ounces. They found none of the millions of dollars Pickard supposedly amassed, either. But nonetheless, he is now serving two consecutive life sentences without possibility of parole. Pickard has become acid’s best-known martyr in the process, continuing his advocacy and artistic pursuits from jail.

Pickard has successfully sued the US government because his requests for information on his case returned two blank DEA documents. But the appeals of his sentence have continually failed. The author visits him regularly in jail in an effort to find the truth.