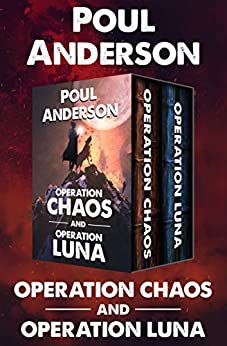 Operation Chaos: In a world where magic is real, werewolf Steve Matuchek and powerful witch Virginia Graylock are paired together in the war to stop the invading Caliphate forces from taking over America. Their mission: stop the enemy from unleashing their superweapon—a genie in a bottle. And that is only the beginning of an adventure that will take them quite literally to Hell and back . . .

“Operation Chaos was one of the truly fine fantasies of the 1970s, a fantasy whose magic was so splendidly engineered that you felt it was as logical—and as likely—as our real technology.” —Harry Turtledove

“A great read, from a master writer at the top of his game.” —GirlsWithGuns.org

Operation Luna: Now married with three rambunctious children, Steve and Ginny once again find themselves fighting for their country as they try to stop a plot to sabotage America’s first manned mission to the moon (in an alternate history timeline, that is). But they will need help from a loyal cadre of magical allies if they hope to avert a catastrophe . . .