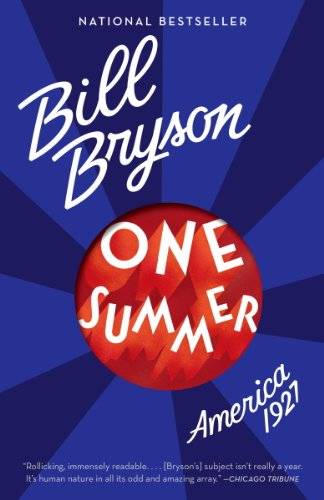 A Chicago Tribune Noteworthy Book A GoodReads Reader's Choice In One Summer Bill Bryson, one of our greatest and most beloved nonfiction writers, transports readers on a journey back to one amazing season in American life. The summer of 1927 began with one of the signature events of the twentieth century: on May 21, 1927, Charles Lindbergh became the first man to cross the Atlantic by plane nonstop, and when he landed in Le Bourget airfield near Paris, he ignited an explosion of worldwide rapture and instantly became the most famous person on the planet. Meanwhile, the titanically talented Babe Ruth was beginning his assault on the home run record, which would culminate on September 30 with his sixtieth blast, one of the most resonant and durable records in sports history. In between those dates a Queens housewife named Ruth Snyder and her corset-salesman lover garroted her husband, leading to a murder trial that became a huge tabloid sensation. Alvin "Shipwreck" Kelly sat atop a flagpole in Newark, New Jersey, for twelve days -- a new record. The American South was clobbered by unprecedented rain and by flooding of the Mississippi basin, a great human disaster, the relief efforts for which were guided by the uncannily able and insufferably pompous Herbert Hoover. Calvin Coolidge interrupted an already leisurely presidency for an even more relaxing three-month vacation in the Black Hills of South Dakota. The gangster Al Capone tightened his grip on the illegal booze business through a gaudy and murderous reign of terror and municipal corruption. The first true "talking picture," Al Jolson's The Jazz Singer, was filmed and forever changed the motion picture industry. The four most powerful central bankers on earth met in secret session on a Long Island estate and made a fateful decision that virtually guaranteed a future crash and depression. All this and much, much more transpired in that epochal summer of 1927, and Bill Bryson captures its outsized personalities, exciting events, and occasional just plain weirdness with his trademark vividness, eye for telling detail, and delicious humor. In that year America stepped out onto the world stage as the main event, and One Summer transforms it all into narrative nonfiction of the highest order.