On The Enemy’s Side 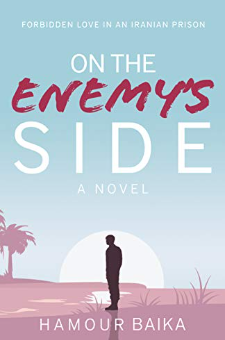 A breath-taking story about love and courage... [and] finding an inner compass that leads through chaos, destruction, and violence. With each sentence, one learns to be more historically aware, tolerant, courageous and loving.Botakoz Kassymbekova, historian and author of Despite CulturesHamour Baika tells a necessary story... It’s necessary because it’s told with such urgency, beauty, and sensitivity. Baika layers in a hidden—and forbidden—history of gay men, giving those men a voice.John Copenhaver, award-winning author of Dodging and BurningOn the Enemy's Side features well-developed characters, setting, and story-line... This novel is literary in tone and is reminiscent of the short story, "The Guest," by Albert Camus. While Hesam and Bahram are at the center of the novel, the themes of identity, honor, and morality in the face of oppressive systems repeats with each character.Angelic Rodgers, originally published on Reedsy DiscoveryIn 1980, as the world is captivated by the Iranian hostage crisis, aspiring doctor Hesam drops out of medical school in Rome and returns to Iran to serve his country. A member of the Revolutionary Guards Corps, he becomes a prison guard in Ahwaz, assigned to investigate and interrogate political prisoners. The more he learns about ethnic and religious tensions, however, the more he finds the concept of revolutionary justice questionable. Hesam finds solace in speaking with a defiant young prisoner with whom he develops a passionate bond. But when Hesam discovers damning evidence about the detainee, he has to choose between his political ideals and his conscience in a country where same-sex love is violently condemned.On the Enemy’s Side is contemporary historical fiction, inspired by real events during a tumultuous period preceding the Iran Iraq war. Baika has crafted a memorable cast of characters of divergent and conflicting political allegiances, all who struggle to do the right thing in a morally complicated world. Astutely crafted, meticulously researched, and emotionally engaging, On the Enemy’s Side is a haunting modern classic about love during a civil war.