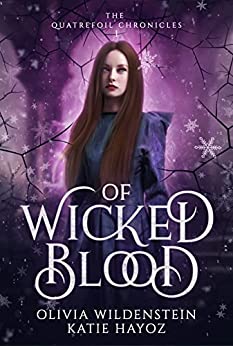 Fans of Elise Kova and Annette Marie will fall hard for this slow-burn romantic urban fantasy duet full of wily magic and dark humor.
NO REST FOR THE WICKED . . . OR THE CURSED.
SLATE
I didn't mean to steal the Bloodstone from the de Morel's crypt.
Scratch that, I did mean to steal it.
Until I realized it was a curse-magnet that only comes off if I, along with a jolly trio, successfully defeat four curses. If any of us fail, I'm dead.
I've never been a glass half-empty sort of person, but my glass looks in dire need of a refill right about now.The only highlight of this wicked treasure hunt: feisty, entitled Cadence de Morel.
CADENCE
I was raised on tales of magic, in a small town reputed to be the birthplace of French witchcraft.
Did I believe all the stories I heard? Absolutely not. I mean, if magic existed, Maman wouldn't have died, and Papa wouldn't be stuck in a wheelchair, right?
Wrong.
The night Slate Ardoin waltzes into my life, wearing a ring he stole from my mother's grave, I call him a monster. But then I meet real ones, and Slate, well . . . he becomes something else to me.
Something frustrating to live with but impossible to live without. Something I will fight for, no matter the cost.
"This is storytelling at its best." - WENDY HIGGINS, NYTimes bestselling author of Sweet Evil
*Warning: profuse cursing (and not just the magical kind).*Intended for readers 16 and up.