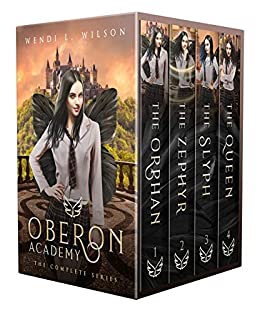 The Orphan
In a world where dark faeries have stepped in to save the planet from humanity’s mistakes, seventeen-year-old December Thorne is nothing but a shadow. Offered a scholarship to the prestigious Oberon Academy, December finds herself living in a whole new world. Boundless food, clean clothes, a safe place to sleep, and the potential for true friendship make her new life seem almost too good to be true—but the school has a secret.
The Zephyr
After a tragic loss, Crispin Jonas took over the role of mentor, pushing December to practice things beyond the standard Oberon Academy lessons on being a good Sylphid. His lessons revolved around her other half—her dark side.
Devastated after taking a life, December had a choice to make. She could let her darker half take over and guide her actions, or she could embrace the Sylphid inside her and live on the path of light. But were those her only two choices?
The Sylph
After surviving another face-off with Queen Sebille and discovering the truth about her past, December Thorne’s life has changed dramatically. With everyone now knowing and accepting what she truly is, and her new relationship with her mentor, her life takes a turn for the better. She finally has what she’s always wanted...or does she?
The Queen
After so many surprises and truths revealed, December just wants her life to settle down into some sort of normalcy. She has a place at Oberon Academy, an amazing boyfriend, and for the very first time, a real family…but it doesn’t last. When one of her own is taken by the Zephyr queen, December must take action.
The time for normalcy is over. It’s time for war.