Nothing as It Seems 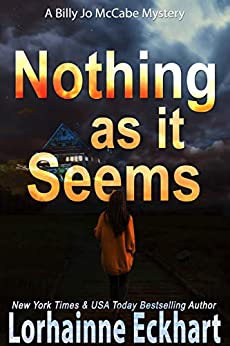 Protecting the innocent comes at a cost, and what seems to be a sleepy, quiet town is anything but.

NY Times & USA Today bestselling author Lorhainne Eckhart brings you the first book in a new crossover series! The social worker and the cop, an unlikely couple drawn together on a small, secluded Pacific Northwest island where nothing is as it seems.

Billy-Jo McCabe never expected to become a social worker, considering the broken system nearly destroyed her. Shortly after she takes a job on a remote Pacific Northwest island, she gets a call about a missing girl.

Meanwhile Roche Harbor detective Mark Friessen is called in to investigate the disappearance, but instead of working with the newly appointed social worker, he ends up butting heads and clashing with her every step of the way. Billy-Jo becomes the rival he does his best to avoid, considering the only conversations they have involve her pointing out his shortcomings and arrogance.

But when Billy-Jo finds herself in over her head, she’s forced to team up with the man who has the uncanny ability to bring out the worst in her and together, they come up against close-mouthed locals, island secrets that hit too close to home, and the realization that their case about finding and helping a young girl has turned into something far more sinister.