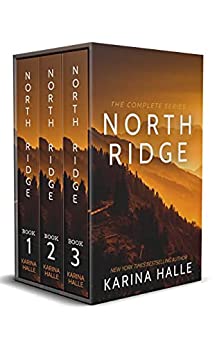 A USA TODAY BESTSELLING SERIES IN ONE COMPLETE BOX SET. In the wild mountains of British Columbia, three brothers grapple with the dangers of their rugged jobs and the hearts of the women they love.

Rough, raw & rugged.
As the man in charge at Ravenswood Ranch, Shane Nelson has never been afraid to get his hands dirty. His sculpted physique isn't the product of a gym, but of years of hard labor under a relentless sun. His straightforward, alpha tendencies come from a man who knows what he wants and goes after it.
And what he wants is Rachel Waters.
He's never stopped wanting her.
They were childhood best friends, then teenage lovers who evolved into soulmates. But on one fateful night, Shane made a grave mistake, breaking both their hearts in the process.
Now, after six years, Rachel is back in the small, wild mountain town of North Ridge, BC.
Ready to face her past.
Ready to face Shane.
Ready to face his dark secret.
But is a second-chance at a one true love in the cards? Or will their wild hearts be broken once again?

John “Maverick” Nelson likes to live his life on the edge – literally. A crucial member of the search and rescue team in the mountainous British Columbian town of North Ridge, Maverick’s brash and bold attitude means he’s the first one to ascend into danger, no matter the risk.

When it comes to women, though, Maverick errs on the side of caution. For all his cocky charm, rugged good looks and sexual swagger, he remains as unreachable as the surrounding peaks. Hot, wild sex? He’ll tell you there’s no better way to spend a cold, wintry night. Relationships? He’d rather freeze.

That is until he lays his eyes on American Riley Clarke. Trading in the crippling expenses of Aspen for BC, Riley is North Ridge’s newest member of their search and rescue team and the only woman on the job, which means spending a lot of time with Mav in adrenaline-pumping situations.

With the chemistry between them hot enough to melt snow, keeping their hands off each other is detriment to the success of their team. Besides, Maverick’s her boss and she didn’t work her ass off in Colorado just to throw it all away for some mind-blowing sex.

But when the worst winter in years sweeps in, Riley and Maverick will have to battle the elements along with their attraction for each other. And if either of them slip up, both of them will be in for a deep freeze.

If love is friendship set on fire, then theirs is about to go up in flames

Delilah Gordon has a secret.

She’s been in love with her best friend and the boy next door, Fox Nelson, since she was six years old.

And while most of her friends and family know about her unrequited crush, the one person who remains oblivious is Fox himself. To Delilah, it’s better this way. She’d rather pretend that they’re just friends, even though her feelings for the moody, rugged mountain man are anything but tame.

Fox Nelson has a secret too. As a wildland firefighter or “hot shot,” Fox parachutes into danger every day he’s on the job, risking all to fight wildfires that threaten ranches, forests and thousands of lives. But while Fox’s job is only for the brave, inside he feels anything but. The more he grapples with his raging demons, the more he realizes Delilah is the only one who can put out the flames.

As the two friends grow closer – and more intimate – than ever before, the more complicated their relationship becomes.
And Delilah has one more secret to reveal.

A secret that will change both their lives…forever. Read more