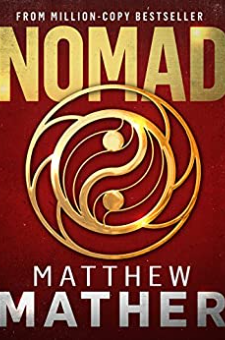 Read the novel voted Science Fiction Book of the Year*, now in development for film. Nomad is the first book in a new four-part epic from million-copy bestseller Matthew Mather.Humanity only has days to prepare. Can one family survive?SOMETHING MASSIVE IS COMING, and it's heading for Earth. That's what astronomer Ben Rollins is told by NASA after being dragged out of bed in the middle of the night. His first instinct is to call his daughter, Jessica, who's vacationing in Italy with his wife.“It's a hundred times bigger than the sun,” Ben tells them. “Somehow we can't see it yet, and we don't know what it is, but they're calling it Nomad--and in just months, the Earth may be destroyed.”But how did they miss detecting it until now? The world erupts into chaos as the end approaches, and Ben discovers his wife and daughter are trapped in Europe. The key to Nomad's mystery--and humanity's ultimate survival--rests in the answers Ben pieces together from his old Cold War-era research papers, in the midst of a desperate scramble across continents to find his family before Nomad swallows the planet. A Coming Apocalypse…A Mystery from Deep Space…An Epic Adventure Thriller…Backed by Real Science. Nomad is the first novel in a four-book saga that follows one family's fight to survive on a new Earth after a whole new category of disaster, all the more frightening as the science behind it was developed by a team of astrophysicists from CERN, SETI, and the Keck Observatory. This sweeping epic comes from the mind of author Matthew Mather, whose novels have sold over a million copies and been translated and published in 24 countries. * Voted Science Fiction Book of the Year in 2015 by Authors on Air Global network (2 million listeners in 46 countries). Nomad has ranked as Amazon’s bestselling book in the adventure, dystopian, hard science fiction, and post-apocalyptic categories, and Amazon’s bestseller in the techno thriller and terrorism thriller categories. All the books in The New Earth Series are now available on Amazon: Nomad: A Thriller (The New Earth Series, Book 1)Sanctuary (The New Earth Series, Book 2)Resistance (The New Earth Series, Book 3)Destiny (The New Earth Series, Book 4)