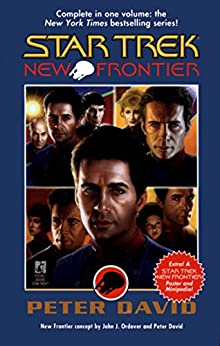 A new Starfleet crew must assemble to aid an ancient empire after its tragic collapse!The ancient Thallonian Empire has collapsed, throwing an entire sector of the galaxy into chaos and unrest. Billions of sentient beings are faced with starvation, warfare, and worse. Faced with a tragedy of interstellar proportions, Starfleet assembles a new, handpicked crew to help where it can and report what it finds. Captain Mackenzie Calhoun, recommended by Jean-Luc Picard himself, takes command of the U.S.S. Excalibur, which is manned by Starfleet's best and brightest, including some old friends from Star Trek: The Next Generation and some of the most dynamic new characters ever to boldly go where no one has gone before! This special hardcover edition contains the first thrilling adventure that launched Star Trek into a new frontier. It also contains a pull-out full-color print of all of the characters and a special "minipedia" guide to the people, places, and things that make up the New Frontier universe!