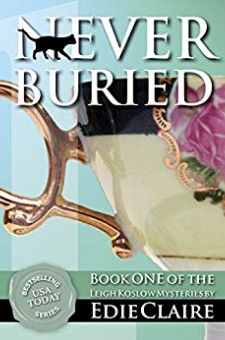 First in the USA-Today and Kindle Top Ten bestselling Leigh Koslow Mystery Series!"A funny, fast-paced, clever, and unusual mystery that will have readers clamoring for more. Sheer delight." --Carolyn HartThe truth about what happened in 1949 went to Paul Fischer's grave... Too bad his body didn't!Advertising copywriter Leigh Koslow doesn't pack heat--just a few extra pounds. And she doesn't go looking for trouble. When she moved into her cousin Cara's refurbished Victorian house, she wasn't planning on discovering a corpse--certainly not one that had been embalmed ten years before. But as anyone in the small Pittsburgh borough of Avalon could tell her, her cousin's house has a history attached. A history dating back to two mysterious deaths in the summer of 1949.Someone wants Leigh and Cara out of the house--someone who has something to hide. But that someone doesn't know Leigh's impetuous cousin, and when Cara digs her heels in, Leigh looks to her old college chum, local policewoman Maura Polanski, for help. But the answers the trio find only point to more questions. Were the scandalous deaths of fifty years ago really an accident and a suicide? Or were they murder?The nearer the women get to the truth, the more desperate someone becomes. Because some secrets are better off kept. Especially when they hit close to home!"A thoroughly delightful debut. Bright, breezy, and witty. I couldn't put it down."--Tamar MyersOriginally published in mass market paperback by NAL/Penguin, Putnam, Inc. in 1999. Large-Print Edition published by Thorndike, 2002.