Never Been Loved So Hood 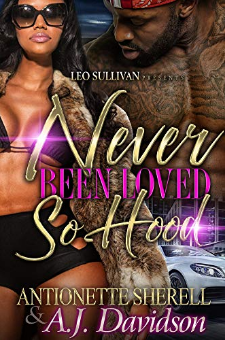 Stormi and Dreami Knight are two sisters from the opposite sides of the track—Stormi being from a two parent household and an unlimited source of funds, while Dreami was forced to get everything she had out the mud. What happens when the pampered princess has no choice but to enter her sister’s world when everything she once knew was snatched from underneath her?Best friends, Mellow Daze and Hazee Mourning have been solid since their younger days. While Hazee is into the street life, Mellow prefers to get his money the legit way to stay out of trouble.When Mellow has an interesting run-in with Stormi, it leads to a chase he had no idea he wanted to run. The only problem is that he’s already in a relationship with his girlfriend, Kenu, and she’s not the type to just let a female take her place.Meanwhile, Hazee finds himself interested in the blunt firecracker known as Dreami. Being more alike than they know, sparks quickly fly between the two. While neither are the relationship type, their chemistry is undeniable.Follow Dreami and Stormi as they take a ride unlike any other with the thoroughbred hoodlums known as Hazee and Mellow. They say hood love is the best kind of love... Can these sisters handle a love so hood, or will they fold?