Mz. Miami – Her Rise to Power 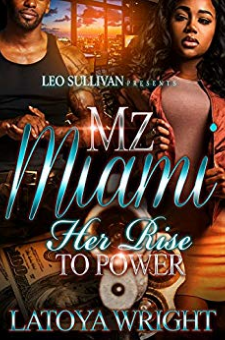 Some hustlers are born and bred in the streets. Some are self-made on a grand level with a millionaire mentality. Bella Ramos, a Colombian immigrant decides she’s tired of living like a slave and she’s coming for everything they said she couldn’t have.At 15 years old, Bella was brought to the US as the hired help and had settled into her less than mediocre lifestyle… until a chance encounter with a seasoned hustler by the name of Andre Alexander. Just the sight of him forces Bella to reexamine her entire existence. A dude like Andre couldn’t possibly want someone who looks as basic as Bella, the hired help. Or would he? In the midst of coming into her own as a vixen in her own right, Bella explores her own sexuality… but with the most unlikely companion imaginable.Dre is a New Yorker at heart, but settles into the Miami lifestyle with his two best friends. His main goal is to take over the city. With his bad bitch, Jade, on his side, Dre is living the life, but something is missing. When he meets Bella, he knows exactly what the missing piece is.But misery loves company, and some of the people surrounding Bella and Dre will stop at nothing to sabotage their love. But for the power couple, money is the motive. The takeover is their only focus, but they need each other to do it. Bella is the mastermind with the plan and wants nothing more than to live the lifestyle she has been forced to watch from the sidelines. Will Bella and Dre prevail, or will alliances between their enemies derail their love and their love of the money…and the power?