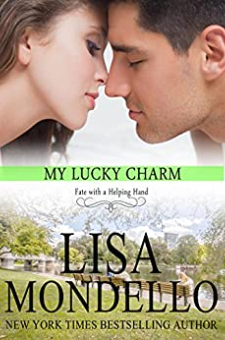 A little thing called desperation had Zoey Preston under the gun. She had two choices, find a job that would help pay enough for her to stay in Boston...or face moving back to the country to a house full of family and various animals. The last thing on her mind was love...until she meets the devastatingly handsome surgeon Marcus Drake. He's like her lucky charm. He's nothing like any of the doctors she's ever met. He drives a Harley and has a thing for Irish music. Too bad she's leaving town.Hard work never bothered Marcus until the night he returned home after a bad day and realized there was nothing there for him. At a crossroad in his life, he decides it's time to make a change. Then he meets Zoey Preston. The green-eyed girl who can't stand the sight of blood is nothing like the woman he'd imagined would one day be his wife. But he soon realizes, she's is everything he wants...for life.Excerpt:Marcus handed Zoey the envelope across the counter. His hand grazed her fingers as the exchange was made, sending tingles of sensation up her arm and making her lightheaded. His deep blue eyes were unlike anything she'd ever seen. In fact, Zoey couldn't quite figure out if she'd ever met a man as striking as Marcus Drake. And he was a surgeon. Oh, the things he could do with those hands. Her cheeks flamed. As if he were reading her mind, he smiled and lifted his eyebrows quickly and said, "I'd better be going.""Okay," she said in a voice that sounded much too breathless for her ears."Can I have my hand back?"Zoey glanced down and saw that their hands were entwined. No, not entwined. That would mean he was holding her hand. Instead, she was clutching his, making it impossible for him to move away from the counter. Acid coiled in her stomach as she snatched her hand away."Sorry.""No need to be. Good luck with your job interview, Zoey.""Thank you."Vicky came up alongside her and extended her hand to Marcus. He glanced at it quickly, but instead of taking her hand, he simply nodded. "It was nice meeting you both." Zoey watched as Marcus left the store and then walked down the crowded sidewalk."My luck changed the moment I met that man. Do you have any idea what he is?" Zoey said.Vicky crossed her arms and nodded. "Stalker."Zoey made a disgusted face. "Don't be ridiculous. He's a surgeon at one of the best hospitals in the country."Vicky pointed a finger at her. "Does that mean he can't be a stalker?" "He's my lucky charm.""What luck? You're not even Irish.""We're in Boston. Everyone is Irish when they're in Boston."Excerpt from MY LUCKY CHARM, book 4 of the contemporar romance series FATE with a HELPING HAND.Fate with a Helping Hand includes:THE GIFTALL I WANT FOR CHRISTMAS IS YOUTHE MARRIAGE CONTRACTTHE KNIGHT AND MAGGIE'S BABYMY LUCKY CHARMIf you enjoy heartwarming contemporary romance novels and romantic comedies, then you'll enjoy the Fate with a Helping Hand series.Other series by Lisa Mondello include the western romance series TEXAS HEARTS and DAKOTA HEARTS.