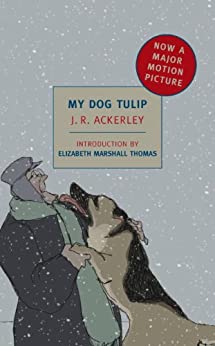 Heartwarming and profound, this account of one writer's relationship with his beloved German Shepherd is “one of the bonafide dog-lit classics” (New Yorker)

The distinguished British man of letters J. R. Ackerley hardly thought of himself as a dog lover when, well into middle age, he came into possession of a German Shepherd. To his surprise, she turned out to be the love of his life, the “ideal friend” he had been searching for in vain for years. My Dog Tulip is a bittersweet retrospective account of their sixteen-year companionship, as well as a profound and subtle meditation on the strangeness that lies at the heart of all relationships.

In vivid and sometimes startling detail, Ackerley tells of Tulip’s often erratic behavior and very canine tastes, and of his own fumbling but determined efforts to ensure for her an existence of perfect happiness.

My Dog Tulip was adapted for the screen as a major animated feature film with a cast that includes the voices of Christopher Plummer, Lynn Redgrave, and Isabella Rossellini. Heralded as “a stroke of genius" by New York Magazine and “the love story of the year” by Vanity Fair, it is a masterpiece of animal literature that is sure to touch the hearts of anyone who has found companionship with their own four-legged friend.