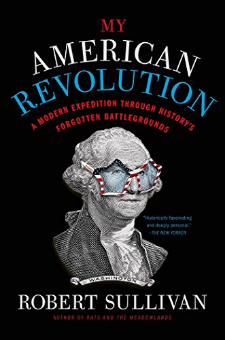 Americans tend to think of the Revolution as a Massachusetts-based event orchestrated by Virginians, but in fact the war took place mostly in the Middle Colonies—in New York and New Jersey and the parts of Pennsylvania that on a clear day you can almost see from the Empire State Building. In My American Revolution, Robert Sullivan delves into this first Middle America, digging for a glorious, heroic part of the past in the urban, suburban, and sometimes even rural landscape of today. And there are great adventures along the way: Sullivan investigates the true history of the crossing of the Delaware, its down-home reenactment each year for the past half a century, and—toward the end of a personal odyssey that involves camping in New Jersey backyards, hiking through lost "mountains," and eventually some physical therapy—he evacuates illegally from Brooklyn to Manhattan by handmade boat. He recounts a Brooklyn historian's failed attempt to memorialize a colonial Maryland regiment; a tattoo artist's more successful use of a colonial submarine, which resulted in his 2007 arrest by the New York City police and the FBI; and the life of Philip Freneau, the first (and not great) poet of American independence, who died in a swamp in the snow. Last but not least, along New York harbor, Sullivan re-creates an ancient signal beacon.Like an almanac, My American Revolution moves through the calendar of American independence, considering the weather and the tides, the harbor and the estuary and the yearly return of the stars as salient factors in the war for independence. In this fiercely individual and often hilarious journey to make our revolution his, he shows us how alive our own history is, right under our noses.