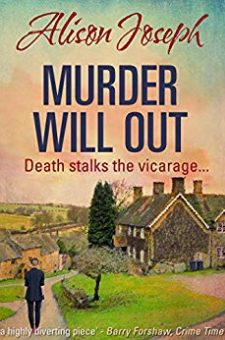 “Wickedly clever." Peter James.1923. The Great War is over, but the ghosts of the dead still linger. Agatha Christie was one of the lucky ones - her husband returned from the conflict - and for her, and her local neighbours, life has resumed. Agatha is beginning to gain some notoriety for her crime writing and she is busy working on her latest novel. But then her neighbour tells her there has been a real ‘murder at the vicarage’ - a young man, Cecil Coates, has been poisoned, and due to Christie’s expertise in the crime genre, the neighbourhood wants her to investigate. At first Agatha is reluctant to get involved. After all, she is a writer, not a detective. But then Robert Sayer, godson of her neighbour, and one of the main suspects in the case, appeals to her directly for help, and she finds herself being drawn in… What secrets and lies are lying beneath the village’s tranquil exterior? Can Agatha Christie use her imagination to draw the murderer out? ‘Murder Will Out’ is the first in a new series of murder mysteries, in which famous authoress Agatha Christie takes time out from writing to investigate real crimes. “Wickedly clever - written with a sharp eye and elan. Guaranteed to make every Agatha Christie fan smile.” - Peter James‘Christie herself is the fulcrum of this highly diverting piece, delivered with all the quirky skill that is Joseph’s trademark.’ - Barry Forshaw, Crime Time. 'Murder Will Out' has not been authorised by Agatha Christe Ltd, and it is a book about Agatha Christie, not by her. Alison Joseph is a London-based crime writer and radio dramatist. She is the author of the series of novels featuring Sister Agnes, a contemporary detective nun based in South London, and has written numerous plays for radio, including the adaptations of Simenon's Inspector Maigret series broadcast on BBC Radio 4. She is currently chair of the Crime Writers Association.